Blazing trails from Texas to Mexico, Stephanie Urbina Jones and her history-making Honky Tonk Mariachi are telling a new story in American music, blowing hearts and minds wide open with their mix of classic country rock with a twang and the intoxicating, joy-filled sounds of Mexico. This new style fondly called ‘country music with chili peppers’ is inspiring and building bridges between worlds. From the first gritos to the last yee haws, from the hallowed stage of the Grand Ole Opry to the two-stepping dance halls of Texas to festivals around the world, Jones and her fiesta platter of love (percussion, trumpets, violins, vihuelas, guitarróns, guitars y mas) are sharing culture, stories, and songs that bring people together. Stephanie tours internationally, having performed in fourteen countries, including appearances at the prestigious Montreux Jazz Festival, Magic Town Music Fest in Mexico, Festival Country Rendezvous in France, Country Gold in Japan, Gstaad Festival in Switzerland and the Belladrum Tartan Heart Fest in Scotland; plus the CMA Music Festival, Americana Music Festival, Willie Nelson’s 4th of July Picnic, and performances on the Grand Ole Opry. Stephanie is a Kerrville New Folk Finalist, #1 Texas Country Artist, and #1 Billboard Country Songwriter. 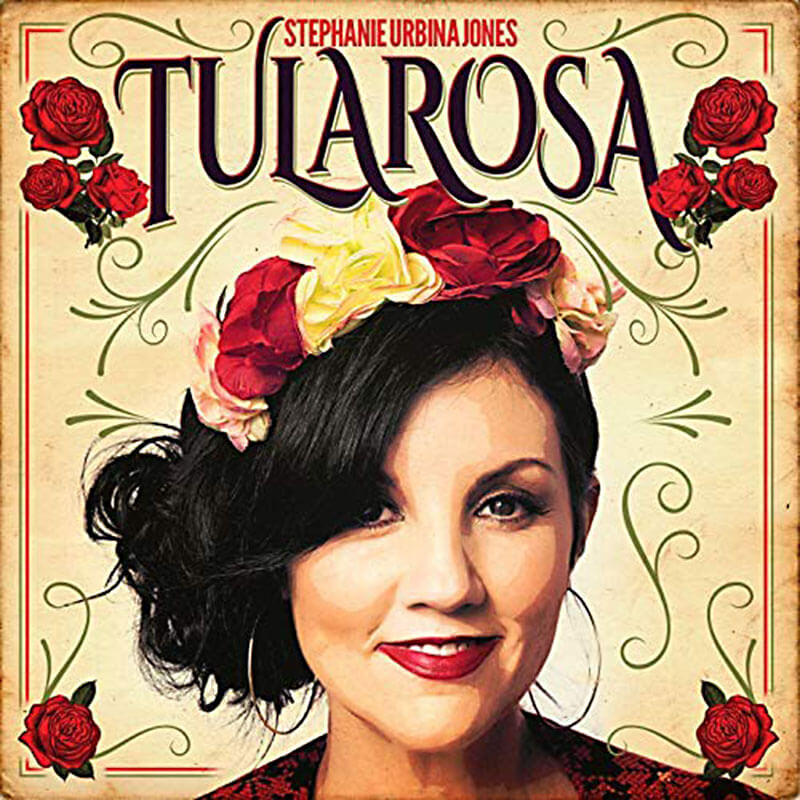 When Stephanie Urbina Jones starts to unwind the story of how her new album, Tularosa, came to life, it’s hard to stop repeating, “Wow. Really?” Her narrative has so many twists and turns, so many meant-to-be moments that can only be described as karmic, it sounds like a fairytale. But then, so does her entire career.

We’re talking about a woman who moved from Austin to Nashville to work with the Texas Tornados’ management agency, landed a songwriting deal almost on a whim, had one of her first efforts become the title track of a Lorrie Morgan album, then watched a competitor on TV’s The Voice win season seven and score a No. 1 Billboard country chart debut with a song she co-wrote — a song Blake Shelton gave him after sitting on it for 15 years.

There’s more. But first, a bit about the album. An inspired marriage of country classics with mariachi rhythms, Tularosa, honors both her personal musical icons — no-last-name-needed legends including Loretta, Dolly, Patsy, Willie, Merle, Hank, Kris, Johnny and June — and the Mexican heritage that feeds her sound. But these long-overdue arrangements also reveal something else: the connections between traditional country music and the Hispanic influences that pervade it.

Texan Urbina Jones, born in San Antonio and raised mostly in Fredericksburg, began melding those influences when she started singing “country jazz” at Austin’s Elephant Room, where she’d taken a booking job after graduating from the University of Texas at Austin. Eventually, she segued into Latin-rooted Americana, also described as “Texicana country folk-rock” or, in her late grandmother’s words, “country music with chili peppers.”

Even though her sure, sinuous voice was made to sing these songs in these arrangements, the plan to do so didn’t form until spring of 2016, when Urbina Jones performed a gig in New Mexico with guitarist Patterson Barrett. Deciding she wanted to spice up her set, she asked Facebook friends for a percussionist connection and was put in touch with Sound Production of Tularosa, a local recording studio. The owner promised to hook her up with someone, but only if she’d visit his studio after her show. Reluctantly, she agreed, then contacted the player. He asked if he could bring his dad, an old-school mariachi. She was thrilled.

“I feel five years old when I hear mariachis. They’re a direct source to joy for me,” says Urbina Jones, whose most profound early-childhood memories include listening to players at Sunday barbecues hosted by her grandmother, a notary public who often aided Mexican immigrants. (She’s even got a song about it — “Mariachis Make Me Cry,” which earned her a finalist spot in the 2002 Kerrville Folk Festival New Folk Competition.)

That night, they performed several country favorites with a mariachi twist. Afterward, a concertgoer introduced himself, said she needed to record with mariachis, and offered to finance an album using an inheritance from his recently deceased mother.

“He felt it was important music to make to bridge the cultures and heal the divides between so many people’s hearts,” she explains.

That was music to her ears, until she heard the amount: $3,500 — a fraction of what she knew it would cost. But she also knew she had to say yes. Then she went to see the studio, not expecting much.

“I’m not even thinking about recording anything there,” she recounts, “and then I get that feeling, that knowing feeling. Like, ‘Oh, this is where we’re supposed to do it.’”

She’d already written an album about her great-grandfather, Manuel Urbina, who went to the Vatican to study for the priesthood but ended up crossing the border to become San Antonio’s first Mexican Baptist minister. She didn’t want to record that in unfamiliar surroundings, however.

She and Barrett headed back to Nashville, promising to return; to do what, they had no idea. But she knew the powerful magic already at work would somehow guide them.

On their way home, they visited friends in Lubbock. A guitar soon got passed around. “Patterson started playing ‘Walking After Midnight’ as a Latin cumbia,” Urbina Jones recalls. She used to put a swing on it in her Elephant Room days, so she jumped right in. “It was so much fun, we spent the rest of the night trying out songs like Hank Williams’ ‘Cold Cold Heart’ as a mariachi waltz and Loretta Lynn’s ‘You Ain’t Woman Enough’ as a Mexican polka. In that living room, the inspiration for the album came together.”
Other elements quickly fell into place. Radio station La Luz (“the Light”) covered hotel rooms; friends helped with expenses and put them up en route; the studio owner and mariachis, from Tularosa and El Paso, offered price breaks; and players or their families stuffed everyone with homemade pozole or tacos each day.

“The moment we started playing, we knew we were onto something,” she says. “It was hugely collaborative and spontaneous — and fresh, alive and fun. We made music that translates culture, heart and soul — joining two worlds that have so much in common to celebrate.”

She’d always wanted to record the Harlan Howard-Buck Owns tune, “I’ve Got a Tiger by the Tail,” an Elephant Room staple, and the Lynn Anderson hit “Rose Garden.” And Haggard’s “Silver Wings” was her parents’ favorite song. Once she’d committed to doing a covers album, she had to include Nelson, represented by “Seven Spanish Angels,” and her clever, biting take on the Tom T. Hall-penned Jeannie C. Riley hit, “Harper Valley P.T.A.,” along with Parton’s “Jolene.”

“Having been cheated on, I have lived the desperation of that song,” she says. “When we gave it this new feel, it came alive and felt even more like a telenovela — and more true to song’s intention.”

The album opens with her sassy version of “Walking After Midnight”; it ends with a Texas Tornados’ connection: her Tex-Mex-plus-strings rendition of “Is Anybody Goin’ to San Antone.”

But “Ring of Fire” has an even more direct connection: Tornados co-founder Augie Meyers duets with her on Spanish and English versions (“Jolene” also appears in both languages). Tularosa also features Mavericks accordionist Michael Guerra on the upbeat “Tiger.”

As important as it was for Urbina Jones to honor her beloved influences, she wanted to do the same for the musical genre she calls “classic Mexico.” The album exhibits several mariachi styles, including corrido/polka, huapango, ranchera, cumbia, marcha, bolero and son.

She credits producer Barrett (aka “El Gringo Danger”) with handling much of the arranging; she had intended to produce it herself, but fell ill while recording. “We were all surprised that a gringo could write the mariachi string and trumpet parts so authentically,” she jokes, quickly adding that, after 40 years of music-making in South Texas, “I guess it’s just in him.”

Ironically, Hispanic culture was not “just in” Urbina Jones. Her gringa mother and Mexican-American father split when she was young, and she didn’t reconnect with her dad and his family, including her beloved grandmother — her abuelita — until after high school.

Urbina Jones was already living in Nashville when she was summoned to San Antonio; her abuelita was dying. Before she passed, she said in Spanglish to Stephanie, whom she called mija (my little girl), “You were born to be a mensaje (messenger); la puente (a bridge), sharing the beauty of our culture with the world through your music.”

Urbina Jones didn’t even know that culture, but her grandmother insisted she would find a way. So she went to Mexico to learn, boarding with a family in a small San Miguel house during her three months at a foreign-language institute. She arrived an “entitled American”; she left enraptured by the culture — and committed to telling its story in song.

“I just fell in love with the people, with the way of life,” she says. “I would have stayed there forever. But I had a mission at that point. I understood what my grandmother wanted me to translate: what’s missing is the beauty, the culture, the love, the joy, the passion, the kindness, the compassion that lives in the heart of Mexico.”

She took her great-grandfather’s name as her middle name, remortgaged her house (the first of three times) and made her first “real” album, 2002’s Stephanie Urbina Jones.

Since then, she’s not only learned to trust fate, she’s learned to embrace where it takes her — from performances in 14 countries, including some of the world’s most prestigious festivals (among them Switzerland’s Montreux Jazz Fest and Japan’s Country Gold) to duetting with Nelson at a Fourth of July Picnic. Her own version of “Shakin’ Things Up” also made her the first independent female artist to hit No. 1 on the Texas Music Chart.

“Everyone loves passion. Everyone loves heart,” Urbina Jones explains. Since she declared her mission to celebrate Hispanic culture in song, she’s never wavered from that goal, even though she’s become a Shamanic Minister and Toltec teacher as well.

“I trust it now,” she says of her own passion. “I trust when I know that I know, to follow that.”

Listeners should do the same; once they hear Tularosa, they’ll know what she knows: These cultures are already united, and this album is indeed meant to be.
True to form, the magic continues. Just days before the official release of Tularosa, the stars aligned again when Jones and her band of mariachi were invited to perform with The Time Jumpers. The performance lit up the room and was captured on video. That video went viral and soon garnered a dream-come-true invitation to perform on the Grand Ole Opry, where they received a standing ovation for their classic country-meets-mariachi history-making performance.